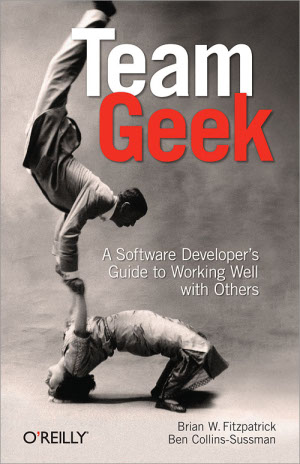 Many books have been published about the technical aspects of software development, and, granted, a lot has been written about how to successfully manage IT projects and about why and how to apply certain agile methodologies. Yet, you hardly find any literature dealing with the human factors of software development, neither does it play a significant role on any of the computer science curricula that I know of.

This is is especially strange because, based on my own experience and my conversations with other developers, human problems among team members as well as with other stakeholders, be it managers or users, seem to be very common and can have more serious consequences for the success of a project than is apparent at first glance.

Behold, though, fellow developers, you no longer need to shed lonely tears! "Team Geek" is a completely non-technical book by Google's Brian Fitzpatrick and Ben Collins-Sussman that, while also containing some crucial lessons for management people, is targeted explicitly at software developers.

As a developer, you are nearly always in the position of being a member of a team, and all of a sudden, sooner than you know, you may even find yourself leading a team, even if it's only temporary. This book teaches you a couple of important things:

In each of the chapters of the book, Fitzpatrick and Collins-Sussman describe certain problems that are likely to occur in software development teams or projects sooner or later, often anecdotally, sometimes also as a collection of anti-patterns. Most of the problems can occur both in a company environment as well as in medium-sized or big open source projects. However, some of them are very specific to open-source projects and stem directly from the authors' experience with the Subversion project.

All this is written in a very entertaining and engaging way, and unless you are an extremely lucky person or someone who is only about to start their career as a software developer, you will often nod in agreement, hopefully smiling, thinking of specific instances of the described problems that you have experienced first-hand. The text is far from being dry, and so are the humourous illustrations that clarify the authors' respective messages.

In the end, Fitzpatrick and Collins-Sussman always come back to the trinity of humility, respect, and trust (HRT) as the core of nearly all their problem solutions, and to building and keeping intact a specific team culture. Of course, there are more specific recommendations than that, but they are mostly based on one or more of those three principles.

While some of the solutions are rather obvious, and some very few I do not wholeheartedly agree with, all in all I found this book to be a real treasure, giving me new insight, new perspectives, and also more confidence in dealing with the addressed human problems of software development. An especially inspirational chapter was the one on "The Art of Organizational Manipulation". It demonstrates that fighting the ways an organization works, no matter how pointless its rules are, only brings you so far. Instead, understand the rules, play by them, and the chances are usually much better that you will be able to change it to the better, thereby essentially hacking the organization.

TL;DR: Being a great developer also comprises being a great team player. "Team Geek" teaches you exactly that and should be required reading for prospective and experienced software developers alike. Even if you don't have any of the covered problems in your current team, you will want to be prepared for it.